On Saturday 10 March 2018, the 18th General Assembly of UCESM which was held in the Monastery of the Carmelites of Snagov, Ciofliceni, Romania, took an end. Some 90 delegates from almost all European Conferences, as well as representatives of UISG, USG and CCEE, gathered under the theme “Widen the space of your tent” (Isaiah 54:2).

The meeting of the presidents, vice-presidents and secretaries-general of the national Conferences of religious takes place every two years alternately in a country of Eastern and of Western Europe, preferably in a place of pilgrimage (Fatima, Czestochowa, Lourdes, Tirana). UCESM has been set up to allow the European Conferences to meet and this question repeatedly came forward during the debates: why does UCESM exist? Do the Conferences really need UCESM?

The theme brought together 34 Conferences of 27 countries: it was about migration and religious life. “Widen the space of your tent”, a quote from Isaiah 54:2, challenged the participants on their liability in the issue of the refugees, but also on the internationalization of religious institutes, new evangelization and the cooperation between them and with the bishops. The speakers addressed the theme from different perspectives.

Father Lucian Bobarnac ofm outlined a Franciscan project for the training and support of Roma people in the north of Romania. Fr. José García sj spoke about the Jesuit Refugee Service, founded in 1980, that brings aid to migrants by being at their service or simply by being there. Sister Cécile Renouard, Assumption sister at the head of a research group on ecology at the Paris University, linked our life with “Laudato Sì”. All underlined that the cry of the poor and the cry of the earth are not separated from each other. Sister Adina Balan cj of Romania, member of RENATE (European network of religious against trafficking), told about the horrible situations of – especially – women and children who are victims of trafficking. Brother Alois of Taizé developed the theme of integration in ecumenism.

Coming from Rome, Archbishop José Carballo joined the participants and enthusiastically made a lengthy presentation about the importance of religious life in Europe, based on the guidelines for the administration of property recently translated into several languages.

The President and the Secretary General of UISG, Sister Carmen Sammut and Sister Patricia Murray, reported about the project for refugees in Lampedusa/Sicily. Fr. Felix Mushobozi of USG presented the project of the Marist brothers and the Salesians for Syrian refugees in Lebanon.

As the days went by, it appeared that our tents inside are obviously larger than they seem to be from the outside.

The richness of religious life in Europe revealed itself by its opening to different cultures, each with its own directions. The purpose of UCESM is to exist. It facilitates meetings between the Conferences in Europe, it can – if the wish comes up – form working groups of national Conferences and address topics that are important to all. UCESM has a small office in Brussels, with the Dutch Sister Marjolein Bruinen (Dominican Sisters of Bethany) as a Secretary General and Mrs. Nicole Jacqué as the Executive Secretary. Members are 39 Conferences from 28 countries representing about 230 000 religious.

On the last day the election of the new president took place. The Piarist Father Zsolt Labancz (43), President of the Hungarian Conference, will bring the mandate of Fr. Giovanni Peragine, who was appointed Bishop in Southern Albania last August, to an end. Sister Danièle Faltz (dcn) of Luxembourg remains Vice-President. There will be new elections in 2020.

The 18th Assembly of UCESM was organized on site by the two Conferences of Romania (men and women): they had invited the Romanian poet and political figure Ana Blandiana to an interesting evening lecture followed by a debate with the participants. Leaders of the Romanian Church came to celebrate or concelebrate the Eucharists, with Archbishop Ioan Robu from Bucharest, the Greek-Catholic Bishop Mihai Fratila and Bishop Florentin Crihalmeanu from the Eparchy of Cluj-Gherla. The facilitator was Sister Denise Boyle from Ireland, day-to-day work was in the hands of Sister Marjolein and Ms. Nicole. There is still uncertainty about the venue of the next General Assembly, the 19th: Malta, Ukraine and Germany are candidates.

The final message of UCESM addresses all men and women religious in Europe and wishes to convey encouragement and inspiration to better face the issues of migrants and refugees. 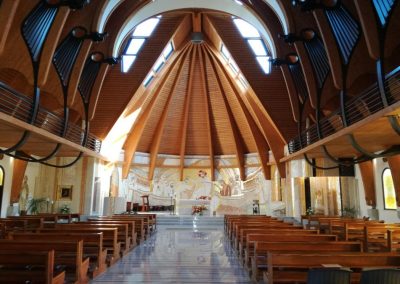 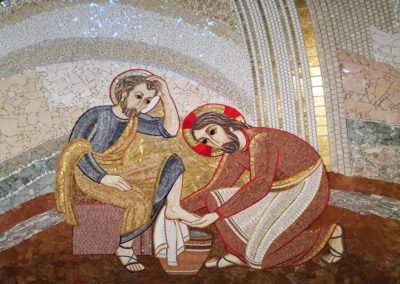 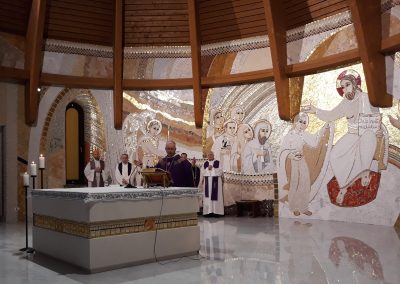 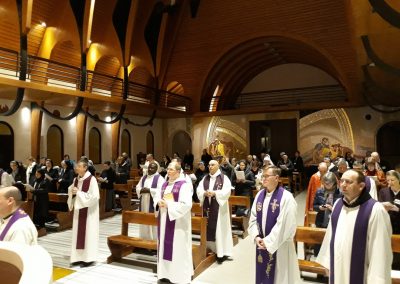 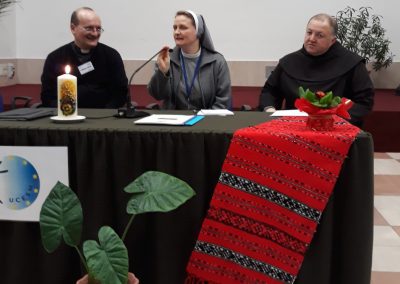 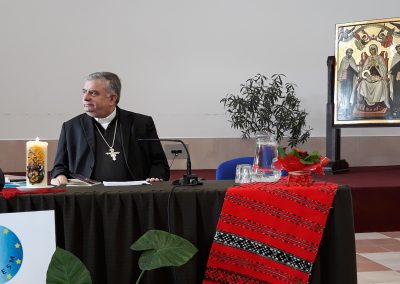 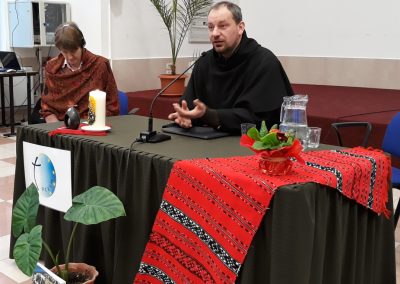 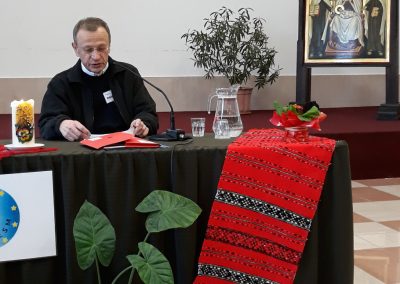 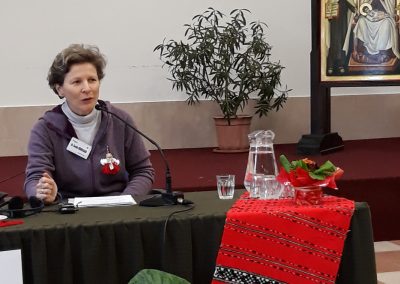 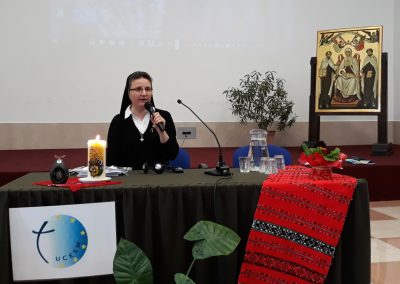 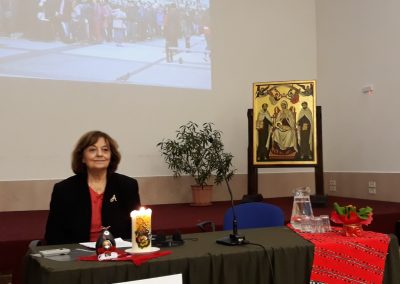 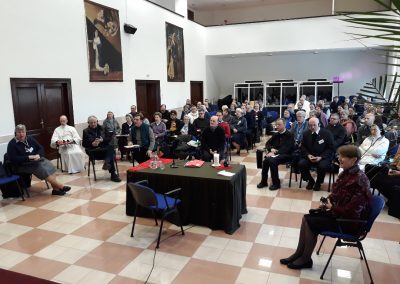 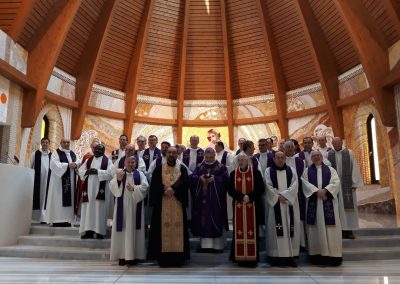 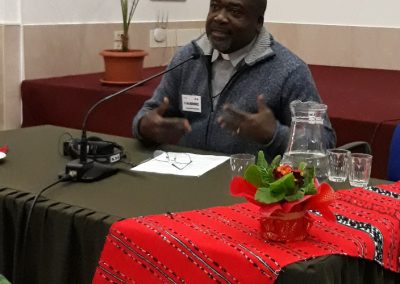 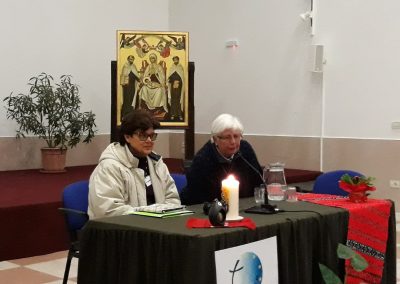 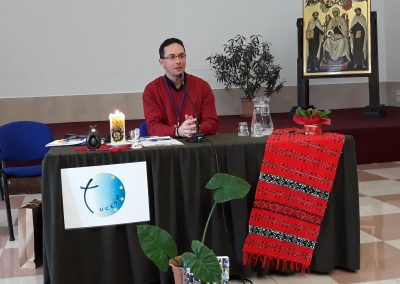 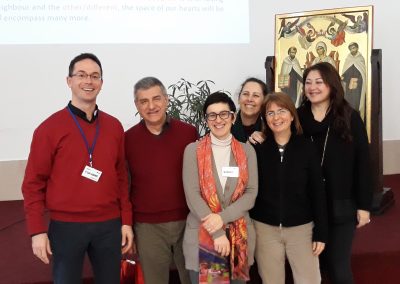 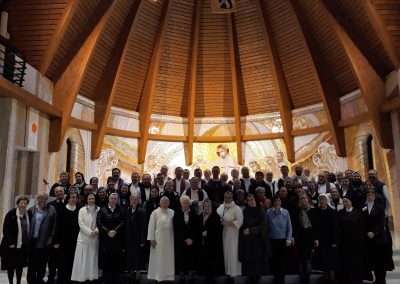