Increasingly affected by the corona crisis, our 19th General Assembly took place last week in the Roggenburg Monastery near Ulm. About 50 religious men and women – instead of the 70 who had registered – took part. The European meeting of the Major Superiors ended a little earlier than planned on Friday 13 March at noon.
The theme of the meeting was “Together on the way to face the challenges of religious life in Europe”.
After the welcome and the celebration of the opening mass, celebrated by the President of UCESM, Piarist Father Zsolt Labancz, the President of DOK (German Conference of Religious Orders), Sr. Katharina Kluitmann, gave a very interesting historical account of the present situation of the Church in Germany. She stated: “We religious should confidently radiate our life model: that we refer to God every day and thus keep open the hope of eternal life.”
The program which had carefully been put together had to be adjusted almost every hour. Thus two speakers (the Prefect of the Vatican Congregation for Religious Affairs, Cardinal João Braz de Aviz, and Mons. Paolo Martinelli) and also the participants from Italy could not come, because at that moment journeys from Italy were already no longer allowed.
Other participants also had to cancel.
After some trials, the Cardinal was connected via livestream from the Vatican. With reference to a word of Pope Francis, he admonished the assembled religious women and men to beware of a “spiritual worldliness”. He called them to leave the well-trodden paths and to risk new ways of realizing their charisms. Especially the cooperation between women and men religious communities could be a real enrichment. Also in ecumenism it is important to strive for common ways beyond historical separations. Moreover, the synodality of religious communities is a value from which the whole Church could learn.
Also on the first day the reports of the President, the General Secretary and the Treasurer were read out.
Unfortunately, we had to do without the reports from the UISG and USG planned for the evening – for the above-mentioned reason.
Sister Nicole Grochowina, a religious and historian from the Evangelical Community Christusbruderschaft Selbitz, noted the next day that the current “unbounded world” promotes situations in which it seems “almost impossible” for individuals to be able to exist within all these challenges. As a consequence, the world is characterized by a multitude of fears. The religions, Sr. Nicole said, has something to counter this: people who believe rely on God’s promise to be among men even if they cannot perceive, hear or feel him. To believe in this promise is “the first, most important and greatest task for religious today”.
In the afternoon, the process of “Open Space” was initiated by the moderator from Ireland, Sr. Denise Boyle.
It became clear that religious communities in the various countries are facing different challenges. For example, on the subject of dying communities, the religious from Western Europe in particular made it clear how those affected can be helped spiritually, humanly, financially and organizationally.
As regards the issue of vocational pastoral care, religious from Eastern Europe however emphasized that there is by no means a decline in religious life everywhere. Where this is the case, the UCESM President said, it is important to counter this with an attitude of hope that is in keeping with the Gospel.
In the evening, two members of the movement “Communion among Charisms” came along and through their presentation they showed the participants what “communion” can look like. “Communion among Charisms” (actually “Together of Orders”) is a movement that starts from the Focolare (see fokolar-bewegung.de). One of their initiatives are the annual “Ottmaringer Tage”.  Father Alois Schlachter was able to convey, by means of pictures, the spirit of respect, tolerance and mutual appreciation of people of all religions and world views, which was very noticeable during the days. This gave some of us the taste to be there in 2020. Hopefully they will be able to pass from July 6 to 10. Their photographer, Mrs. Haaf, who accompanied us for a few days, delighted us with beautiful pictures.
A host of the meeting was the Apostolic Nuncio in Germany Nikola Eterović. He celebrated a Eucharist on Wednesday evening with the assembled religious superiors.
After the continuation of the “Open Space” process, we left for a visit to Augsburg, followed by a simple dinner. Unfortunately mass in the Augsburg Cathedral could not take place with the designated bishop, Dr. Bertram Meier.
Due to the insufficient number of people present, some votes (revision of our statutes and new regulations for the fees) as well as the planned elections to the UCESM Executive Committee were postponed to the next General Assembly.
On the day where these were to take place, a very important event took place, namely Conferences from certain regions or with certain fields of interest met and worked out a number of concrete proposals and plans for the future.
Thus, the participants who had arrived as “colleagues” separated as “friends”.
Many of the lectures and reports will be sent to those attendees shortly. 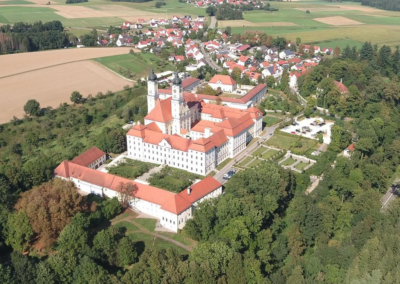 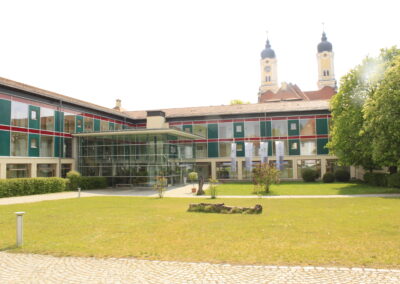 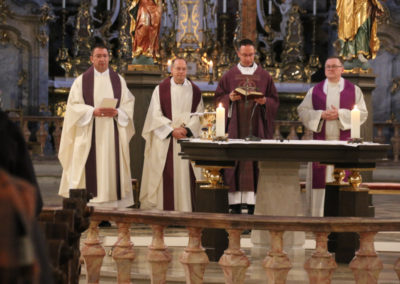 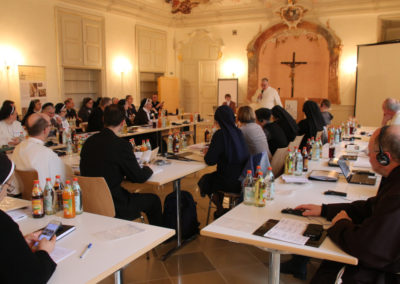 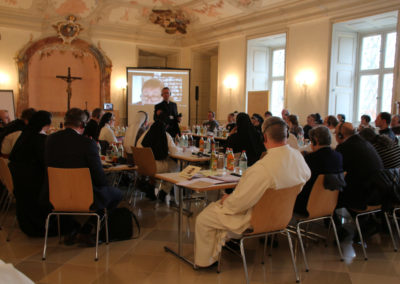 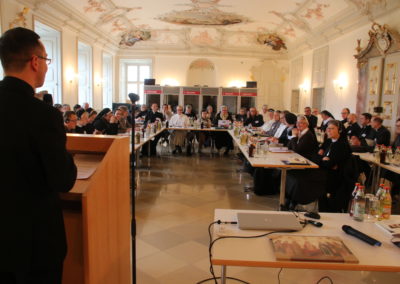 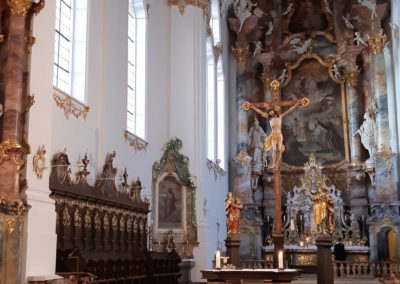 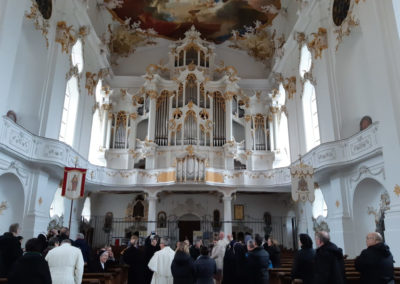 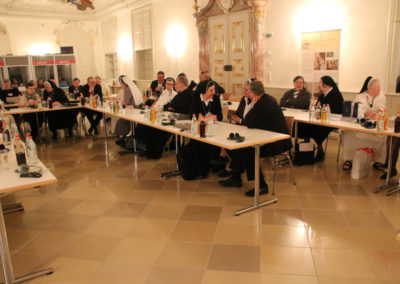 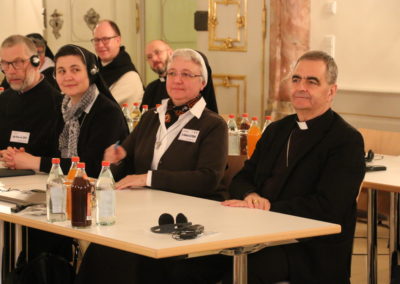 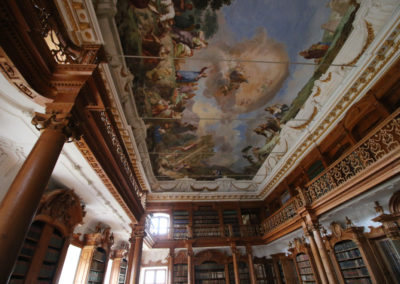 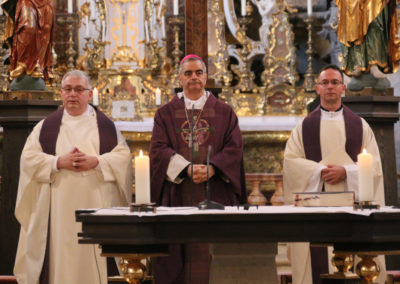 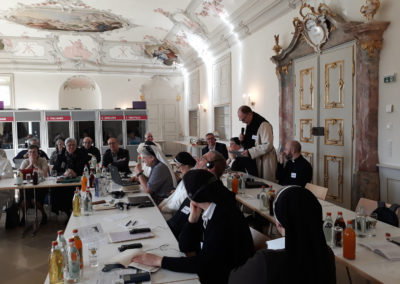 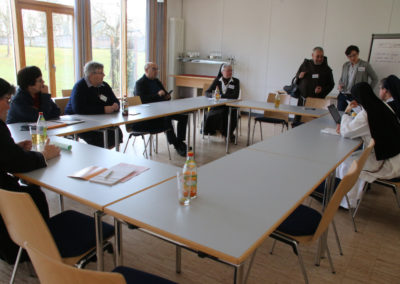 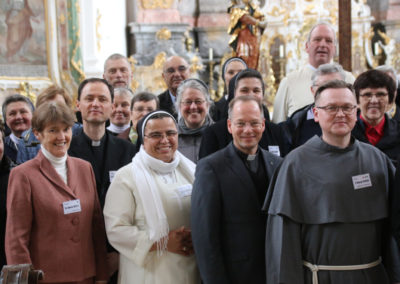 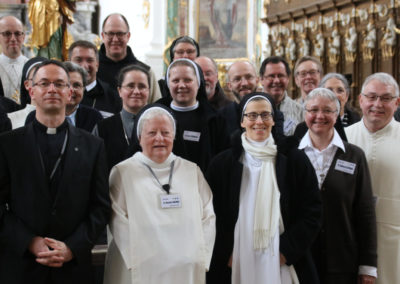 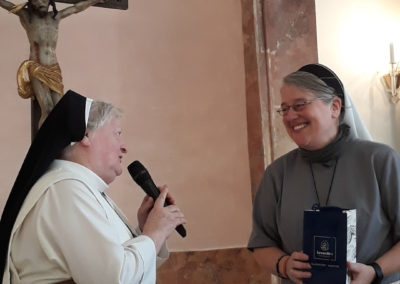 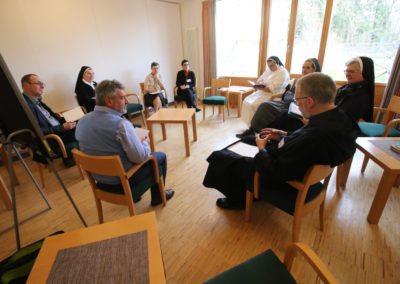 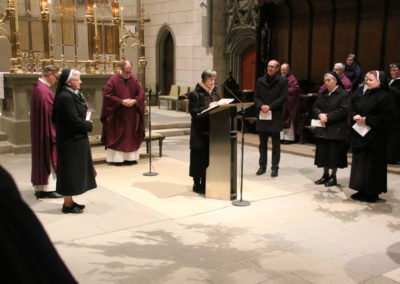