New presidency of the Croation Conference of Religious

At the 52nd Electoral Assembly of the Croatian Religious Conference (HRK), held on 15 October 2020, the major superiors elected the presidency of the Conference for the next three years.
Fr. Slavko Slišković, Provincial Superior of the Croatian Province of the Dominicans, was confirmed as President, while Sr. Gordana Igrec, Provincial Superior of the Daughters of Divine Charity, was elected Vice-President. The Assembly elected four members of the Conference’s Council from among the major superiors: Sr Mariangela Banić, major superior of the Community of the Handmaids of the Child Jesus, Sr Mariangela Galić, provincial superior of the Community of the Handmaids of Charity, Fr. Dalibor Renić, provincial superior of the Croatian Province of the Society of Jesus, and Fr. Milan Krišto, provincial minister of the Franciscan Province of Saints Cyril and Methodius. The President of HRK, Fr. Slavko Slišković, on behalf of all religious communities, thanked the current members of the Council: Sr. Ksenija Leko, Provincial Minister of the Croatian Province of the Roman Union of the Order of Saint Ursula, and Fr. Ivo Martinović, Provincial Minister of the Franciscans of the Third Order Regular of St. Francis.
In addition to the election procedure, in the morning the religious superiors decided to support the missionary projects reported by seven religious communities.
In the afternoon, the Assembly discussed the guidelines for the protection of minors and vulnerable adults and the work of the commissions of HRK: the Commission for (pre-) school education in institutions run by religious communities, the Commission for Nursing Brothers/Sisters, the Commission for the ongoing formation of religious men and women, the Commission for the initial formation of religious men and women, the Commission for the pastoral care of vocations and the Commission for media and publishing.
Mgr Zdenko Križić, Bishop of Gospić and Senj, who also presided at the Eucharistic celebration, was present at the Assembly, while Cardinal Josip Bozanić sent a written greeting to all those present at the Assembly.
This year’s Assembly, due to the pandemic situation caused by the coronavirus COVID-19, lasted only one day and was not organised jointly with the Conference of Major Superiors of Bosnia and Herzegovina. Representatives of KORUS (Conference of Major Superiors of Slovenia) also did not participate in the Assembly. 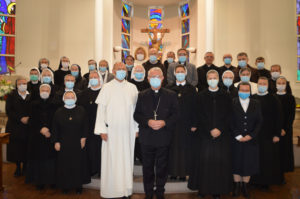